Can a scooter enjoy, contemporaneously, protection as a three-dimensional trademark (hereinafter 3D mark) and under copyright law?  Apparently it can, at least according to the Court of Turin, which recently said so, with its decision no. 1900/2017 dated March 17, 2017.

The case was started when Piaggio, maker of the scooter Vespa, asserted rights arising out of its 3D mark protected by Italian mark registration 1556520 filed in August 2013: 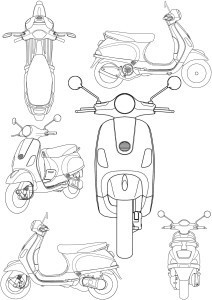 After the seizure, the two Chinese companies (the “Plaintiffs”) filed an action requesting the Court of Turin to declare that their scooters did not infringe Piaggio’s rights and that the 3D mark was invalid due to: 1) lack of novelty, being anticipated by the Plantiffs’ models, 2) lack of distinctive character and 3) infringement of article 9 of the Italian IP Code under which no signs shall be registered as trademarks if they consist solely of the shape dictated by the nature of the product, the shape of the product necessary to obtain a technical result, or the shape that gives substantial value to the product.

The Court, somewhat unusually, ordered a technical expert opinion (differently from patent cases, which require the judgment of a technical expert of the sector, the standard in trademark cases is, according to the Court of Justice’s case law, that of an average consumer, “reasonably well informed, observant and circumspect”).

Based on the expert opinion, the Court first rejected the invalidity of the 3D mark for lack of novelty. It held that the 3D mark had enjoyed protection as an unregistered mark since 2005, the year that the model called LX Vespa, reproduced in the 2013 mark filing, was launched in Italy. The Court justified its findings saying that the unregistered 3D mark enjoyed renown among the consumers of reference (Italian scooters’ customers (aficionados) given the large volumes of sales shown by Piaggio of its Vespa LX (60 in roman numbers) created to celebrate the 60th anniversary of the Vespa.

Second, the Court rejected the alleged lack of distinctive character. According to the Court, since 1945, all Vespa scooters -including the model LX – have four distinctive features (one of them being the “upside down Ω” shape in the connection between the seat and the footrest) that constitute the “heart” of their shape and allow consumers to easily link them to Piaggio. In support of the distinctive character of the Vespa 3D mark, the Court also cited the results of a 2014 survey which revealed that a very high percentage of those interviewed were able to recognize the shape of the Vespa and to link it to Piaggio.

The Court denied that the Vespa’s shape is imposed by the nature of the product and that it is necessary to achieve a technical result pointing out the existence in the market of scooters with different shapes and the fact that the same, or even better, technical results could be achieved with other shapes. Further, the Court observed that consumers usually buy a Vespa for technical and functional reasons, besides the aesthetical ones and thus, the Court excluded that the Vespa’ shapes gives substantial value to the “product”.

In conclusion, the Court thus confirmed the validity of the 3D mark and held that it was infringed by the Ves model although not by the Cityzen and Revival models.

As a result of the defendant’s counterclaims, the Court also went on recognizing that the Vespa scooter can be considered an industrial design with creative character and artistic value that can be protected by copyright under Italian law. The Court’s justification for this finding is that the “multiple and exceptional awards from many important cultural institutions, which include the Vespa amongst the most important expressions of design, confirm its creative character and artistic value. And in fact, the creative character and artistic value of a design work are attested and should be assessed on the basis of the recognition by the market and the artistic circles, considering the critical acclaim, the awarded prizes, the presence in museums, the participation in exhibitions, the publications in magazines”. Consequently, the Ves model was also considered to have infringed Piaggio’s copyright.

While this decision is likely to be appealed, (in 2014 the Plaintiffs had already filed an invalidity action against Piaggio’s EUTM 11686482 before the EUIPO, but the proceedings were suspended in Oct. 2015 until the conclusion of the invalidity action initiated by Piaggio against the “Revival” scooter design RCD 1783655-0002, currently pending before the EUIPO Boards of Appeal) one cannot but wonder how the Turin Court may reconcile having granted protection under copyright law to the Vespa scooter considering it an industrial design with creative character and artistic value, while excluding that the Vespa’s shape (embodied in the 3D mark) gives substantial value to the “product”. Possibly the Appeal Court will explain.

We will keep you posted on the developments.