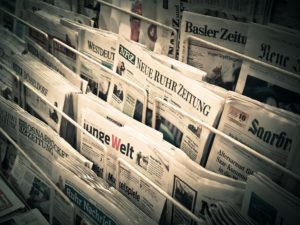 Following the CJEU’s judgment of 12 September 2019, the German national related right in favour of press publishers established in 2013 is unenforceable for formal reasons. But a new related right will be introduced shortly with the implementation of the DSM Directive. The competition law issues brought up in Germany will remain for the EU related right.

More than 6 years ago, on 1 August 2013, a national related right in favour of press publishers was introduced in Germany. It can be found in Sections 87f-h of the German Act on Copyright and Related Rights (Urheberrechtsgesetz – UrhG) (English version available here). As already reported, when Advocate General Hogan published his opinion in this case at the end of 2018, the aim of the new provisions was to give press publishers control over unlicensed online use of their content by third parties, in particular search engines. The German legislator intended to provide press publishers with additional sources of income from the internet, because revenue streams for press publishers have diminished in the digital era.

Against this background, it comes as no surprise that in one of the first cases VG Media, a collecting society acting for press publishers, sued Google as Germany’s leading search engine. VG Media brought an action against Google for damages and information with regard to Google’s use of text excerpts, images and videos from press and media content without authorization and in particular without paying a licence fee. The use in dispute was not only Google News, but also the main search engine service provided by Google as far as it displayed the content at issue.

In the case VG Media/Google, the question arose whether the provisions were unenforceable because the German Government had failed to notify the European Commission of the legislative proposal. Art. 8 (1) of Directive 98/34 (which was subsequently repealed and replaced by Directive (EU) 2015/1535) requires Member States to immediately communicate to the Commission any draft “technical regulation”.

The Landgericht (District Court, first level court) Berlin thought that at least parts of VG Media’s claims against Google were justified, but had doubts due to formal reasons as to whether VG Media could rely on the relevant German national related right. In May 2017, the court decided to refer two questions to the Court of Justice in order to determine whether the provisions establishing the press publisher related right fell within Directive 98/34. The question was whether those provisions of the UrhG should have been notified to the Commission during the drafting stage as foreseen in the first subparagraph of Article 8(1) of Directive 98/34. According to the case-law of the CJEU, provisions adopted in breach of the duty of notification under that provision are inapplicable and are, therefore, unenforceable against individuals.

The decision of the CJEU

On 12 September 2019, the CJEU decided that a provision of national law which prohibits only commercial operators of search engines and commercial service providers that similarly publish content from making newspapers or magazines or parts thereof (excluding individual words and very short text excerpts) available to the public, constitutes a ‘technical regulation’ within the meaning of Article 1(11) of Directive 98/34. In such cases, the draft of such laws would be subject to prior notification to the European Commission pursuant to Article 8(1) of Directive 98/34.

The decision of the CJEU is contrary to the view of the European Commission, other Member States and the Federal Government of Germany, which did not consider the notification to be necessary.

With regard to the relevant definitions in Article 1 (2) and (5) of Directive 98/34, the CJEU found that there was in fact no doubt that the services provided by commercial operators of internet search engines constitute such services. In contrast, that was not necessarily the case for services provided by commercial service providers that similarly publish content. The publication of the content of newspapers or magazines could be done other than via the internet or by means of electronic communications, such as, for example, on paper.

According to the CJEU, in order to classify a rule as a ‘rule on services’, the definition in Article 1(5) of Directive 98/34 required that rule to be ‘specifically’ aimed at information society services. In that regard the CJEU noted that it was important to have regard to both its statement of reasons and its operative part. Moreover, it was not required that ‘the specific aim and object’ of the rule in question was to regulate information society services. Rather it was sufficient that the rule pursued that aim or object in some of its provisions. In addition, even where it was not apparent solely from the wording of a national rule that it was aimed, at least in part, at regulating information society services specifically, that object might nevertheless be taken quite readily from the legislative reasons given for the rule, inter alia from the travaux préparatoires for the law.

First, the CJEU stated that Paragraph 87g(4) of the UrhG expressly referred, inter alia, to the commercial providers of search engines, and it was common ground that they provide services falling within the scope of Article 1(2) of Directive 98/34. Secondly, it appeared that the national rule at issue had as its specific aim and object the regulation of information society services in an explicit and targeted manner. It was clear from the observations submitted by the German Government at the hearing before the CJEU that, initially, the amendment of the UrhG specifically concerned internet search engine providers.

Secondly, the CJEU pointed out that it was true that the exclusive related right to make newspapers or magazines or relevant parts available to the public, provided for in Paragraph 87g(4) of the UrhG, related not only to online service providers but also to offline service providers. However, it was apparent from recitals 7 and 8 of Directive 98/48, by which Directive 98/34 was amended, that the purpose of Directive 98/48 was to adapt existing national legislation to take account of new information society services and avoid restrictions on the freedom to provide services and freedom of establishment leading to ‘refragmentation of the internal market’. It would, however, run counter to that objective to exclude a rule from mandatory notification to the  European Commission pursuant to Article 8(1) of Directive 98/34. It would not be sufficient that the wording of the relevant provisions did not refer to online services, but also covered services provided offline. Rather, the aim and object of the provision also had to be taken into account. The aim and object of the German national press publisher related right was to regulate online services relating to newspapers or magazines. It would thus be a rule specifically targeting services within the meaning of Article 1(5) of Directive 98/34. Consequently, the related right was subject to mandatory notification to the Commission as a draft before enactment of the law.

As a consequence of the above, the provisions of Sections 87f to 87h UrhG cannot be enforced against individuals, according to the case law of the CJEU. The new related right in favour of press publishers failed for purely formal reasons.

The new European related right in favour of press publishers is not affected by the decision of the CJEU.

In April 2019, the new Directive on copyright and related rights in the Digital Single Market (DSM Directive) was adopted. The Directive has to be implemented by 2021. Article 15 of the DSM Directive provides that EU Member States – including Germany – shall provide publishers of press publications established in a Member State with the rights provided for in Article 2 and Article 3(2) of Directive 2001/29/EC for the online use of their press publications by information society service providers. This shall not apply to press publications first published before 6 June 2019. This new European Union related right will see a term of protection of two years – in contrast to the shorter one-year term for the now failed German national related right.

But there is one issue which still needs to be resolved: The new EU related right and the failed German related right for press publishers are not immune to abusive demands by market dominant licensees, in particular on the part of search engines as the major addressee of the related right. In Germany, the most important and by far the market-leading search engine, Google, refused to pay for the use of the related right. Google even approached German press publishers and first threatened them with de-listing and later with no longer using snippets and thumbnails where they would not grant free usage rights to Google. The behaviour of Google has made them the subject of another German court case, which concerns their possible abuse of a dominant position. This case is currently pending before the Kammergericht (Court of Appeal) Berlin after the Landgericht Berlin found no abuse by Google (LG Berlin, Zeitschrift fuer Urheber- und Medienrecht (ZUM) 2016, 879). Some commentators have denied abusive behavior by Google (e.g. Ackermann ZUM 2019, 315; Kersting/Dworschak ZUM 2016, 840, even denying a market dominant position of Google), while others think that requesting a free license is abusive behavior by the market dominant search engine Google (Jan Bernd Nordemann/Wolters ZUM 2016, 846, 848). The main argument is that a company abuses its market dominance where it annuls the aim of the legislator, who intended to provide press publishers with additional sources of income from the internet.

This legal issue will stay relevant with the new EU related right. Reportedly in France, Google is taking a license, but refuses to pay. French media firms have announced they will take the case to the French competition regulator (see here). So, one could say that the failed German related right for press publishers was not introduced by the German national legislator in vain. At the least it serves as a model to shine a light on some of the controversial legal issues which will also arise for the EU related right as it is implemented throughout Europe.